Being an Arsenal fan at this moment, is a lot like visiting the Salvation Army. Ultimately we are relying on the charity of others. “Others” in our case being that poaching, mega-bucks, team of dollar chasers. Manchester City.

Now, I’m not about to go out on a limb and suggest that Man City can alone decide the fate of the league trophy this season. It is of course down to all the eligible teams in the race. It is down to the performances of Manchester United, Chelsea and the squad of unequalled Red and White geniuses in North London, as to whom undisputedly go the spoils.

My point however is that with the upcoming Chelsea fixture this weekend at Stamford Bridge, Roberto Mancini’s team of millionaire misfits might pose the best threat of ramming the league leaders off course. Take into consideration Chelsea’s trip to Inter, a match that put them a little more to the test and maybe, hopefully, weakened their resolve. Anyone left doubting the jetlag and overall weight of a champion’s league fixture should stretch their minds back to Sir Alex Ferguson’s account of why Everton overpowered his side recently. Let’s face it, at this point any Arsenal fan will be left wishing to the god’s of the beautiful game to transport us back to pole position. I know, because I witnessed such desperation and mild lunacy last weekend in a local newsagent. 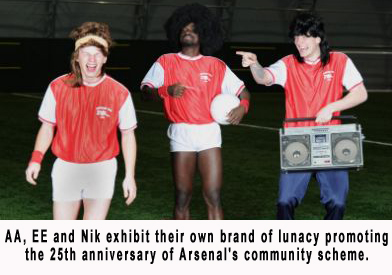 The shopkeeper is a keen Gooner. He plays coverage of the matches on a small TV by his till while serving his customers. I entered the shop around 6pm last Saturday, all football coverage had finished. I made friendly conversation, mentioning the Everton victory over Man United earlier in the day. Expecting a positive reply, and hopefully a response of how Arsenal can manipulate the scenario to their advantage. He was totally disconcerted by that. His mind was literally somewhere else.

“You know, if we had beaten United and Chelsea, we’d be six points clear right now…SIX CLEAR!” he frenetically jaunted at me. He even counted it on his fingers, just in case I hadn’t heard. I assure you I and the rest of the formed queue behind me, had heard.  He went on:

“I’ve drawn up the premier league table as if we had won.” He wanted to produce the false statistics for me, but now very un-nerved, I made a mental note to shop elsewhere in future and passed on the offer leaving the shop.

But his passion and unquestionable belief that we should be Barclaycards Champions this year sparked a fuse inside me. I wanted to construct my own chart of statistics and formulate my own belief behind a strong set of factors. Though mine are at least loosely based on fact.

Other than the crucial over-riding factor that Chelsea lost at the San Siro, we will all no doubt have taken a larger interest in the pretty serious looking injury that had Petr Cech carried off the pitch. With a bit of good fortune he’ll be unable to appear again before the title has been decided, and if Ancelotti is reckoning on Hilario to produce an adequate stand in role for the following eleven premier league games, he’ll surely pay the price. Let’s be honest here, I’ve seen bladder poisoned incontinence victims keep cleaner sheets.

This unfortunately isn’t a guaranteed occurrence to bring the premiership back to the Emirates. None of it is. Manchester City for all their worth, were undone by a plucky Stoke side in the F.A cup (sounds familiar) and since checking out Hilario’s Wikipedia I’ve discovered he does retain a half decent record between the sticks. Still that’s what makes it all the more likely for everything to change. Football, it’s a funny old game.

This entry was posted on Friday, February 26th, 2010 at 9:22 am and is filed under Uncategorized. You can follow any responses to this entry through the RSS 2.0 feed. You can leave a response, or trackback from your own site.