Silverware or Not – What happened to the Carling Cup team of 2007?

The Carling Cup divides gooners. Should we play the kids or should we go for it and try to win some silverware? Not having won anything for 5 years it’s an emotive question.

Arsène likes to use it as a stepping stone for the youngsters he believes will be our stars of the future.

Yesterday afternoon on this blog we touched on the financial restraints we feel Arsene is operating under and the fact that he may need to sell players to balance the books. If that is true then the Carling Cup is a good way to get some of the young players good exposure – put them in the shop window if you like.

Lets examine what happened to the team that played in the Carling Cup final in 2007, and compare them to the full strength Chelsea side they met on the day. 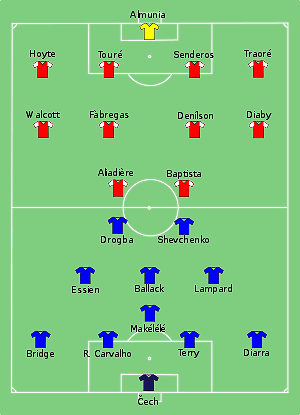 The Chelsea subs were Hilario, A Cole, Mikel, Robben and Kalou

The Arsenal subs were Poom, Djourou, Eboue, Hleb and Adebayor

The whole of that Arsenal squad were first team players who had featured  in teams in the Premiership, Champions League, FA cup and Carling cup games. The  players missing were Henry, van Persie, Freddie, Rosicky, Gilberto, Gallas, Flamini and Clichy.

The players who have since left Arsenal are:-

Aliadiere moved to Middlesborough in June 2007 for £2m;

Mart Poom moved to Watford in May 2007 for an undisclosed fee;

Senderos is currently on loan to Everton and Baptista was on loan to us. The players that have been sold have either wanted away or were surplus to requirements so the Carling Cup doesn’t seem to be a chance for ‘Player For Sale’ signs to be hung around necks but I’m sure the experience helps.

So in 2007 Arsène  took the Carling cup seriously. Yes or No?

When you look at the squad that Chelsea put out it would seem that they were taking it more seriously than us.  I went to that cup final to support the team although I didn’t expect us to get the result as many first team players were missing and some of the Arsenal team were young and inexperienced.

If Arsène is  accused of throwing away the cups and destroying the confidences of the young players by using them in this way, why do we still have eight of the players ( if you include Eboue and Djourou)  from that team playing now. Apart from Senderos who was already having Drogba nightmares – did any of these players suffer from playing in a cup final and not winning?

I don’t believe that the Carling Cup is a valuable piece of silverware. Certainly with our squad depth it would be madness to play a full strength team at any point.  I think the competition is a great platform for some of the inexperienced players to have the chance of mixing it with the big boys and I think  Arsène promises them they will be used in this way. If  we were to win it, I would be thrilled of course but I wouldn’t want to jepodise any of the other chances of silverware by using players unnecessarily.

The Carling Cup final is this coming Sunday and we aren’t in it – how do you feel about that?

This entry was posted on Tuesday, February 23rd, 2010 at 9:31 am and is filed under Uncategorized. You can follow any responses to this entry through the RSS 2.0 feed. Both comments and pings are currently closed.

154 Responses to Silverware or Not – What happened to the Carling Cup team of 2007?