Prompted by my Bros to expand on my criticism of Dick’s current tactics evident at the Fulham game, I offer another controversial effort for the perusal of AAers the world over.

I qualify what I am going to say in advance with the facts that…….

To explain:- Dick has regularly opted recently for the following three players in the vital “central triangle of defence”, and it is here he is making his mistake. Mustafi and Sokratis as CBs, with Xhaka in the central holding/receiving slot.

I will start with the CBs (without really needing to for anyone with eyes).

Sokratis has got guts, is committed and occasionally is in the right place at the right time (See fourth goal against Fulham). But good enough for us as a CB? Nah!

Mustafi is dog’s poo (thought I’d do your job for you, ed). Positionally poor, rarely wins a header as he is a short arse, slide tackles late and nowhere near the ball. Good enough for us as a CB? Nah! 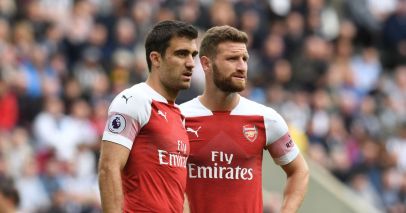 Now, given this criticism, Dick has doubled the problems in his triangle by allowing Xhaka to play at the top as holding/receiver of passes from these two! Xhaka is in my eyes massively overrated. Sure he can spray long balls, but only when the oppo back off, and these long balls are rarely “dynamic” in their effect. (He is no Alonso). Under pressure he shovels poop, and under real pressure, he makes potentially disastrous passes. (He is no Gilberto). He cannot tackle really, and is regularly booked for this (lack of) “skill”. (He is no Kante……or for that matter, Terrier). And much of this slaughtering criticism is because he is not quick enough of thought or limb.

Sorry, I seem to have been a little scathing!

Does he deserve a place in the starting eleven? Well, for the moment my answer is ‘yes’. But play him forward of Terrier and Ouzi (alongside each other and in front of the defence). Both of these two are better at the job required there and, will shore up some of the defensive frailty currently evident. “For the moment” for that is the position I advocate for A M-N in the future, and then it could be bye bye Xhaka for me.

My view, sorry if you think I am still drunk with joy from my recent Birthday.

This entry was posted on Monday, January 7th, 2019 at 6:39 am and is filed under Uncategorized. You can follow any responses to this entry through the RSS 2.0 feed. You can leave a response, or trackback from your own site.