We have been through a miserable few games and tonight we have an opportunity to get back on track. Few will fancy us to defeat a team who appear to have transformed themselves from thug tactics to one that played Man Utd off the park at Old Trafford. Let there be no mistake, United were lucky to take the points and had Wolves taken their chances, they would have won, plus  (DanDan) United scored  on the stroke of halftime and in the 94th minute.

Perhaps it was the criticism of Murphy or the wise words from our Leader but whatever it was Wolves have become a team that plays football, admittedly with a physical dimension but not one that is beyond the rules.

In Matt Jarvis Wolves have one of the in-form players in the PL, a hard working tricky winger with a touch of the Freddie about him. Much has been written about Henry, a robust player and Wolves Captain, Hunt has returned to the team and the two wingers will cause our wayward full backs to concentrate fully on defending. Hopefully the referee (Mark Halsey) will have a good day and keep the game clean.

We have almost a full squad to pick from and are strong everywhere except at Centre Back where Djourou will continue his rehabilitation,  I have the greatest faith in JD having been a supporter of his since he showed so much promise as a youngster and still believe he has all the attributes to become our first choie CB alongside either TV or Kos.  JD has the physique and the pace to become a major player for us, what needs to improve, and improve rapidly, is his positional sense. The long term injury to Vermaelen has caused all our CB’s to play more games than expected and I assume AW would have chosen JD to restart his career in the CC team and from the bench.

Another conundrum is whether to play Cesc. He is a vital cog in the team, our heartbeat, but his performance against WHU was so poor that he apologised in the programme and he was even worse on Sunday with a pass completion of only 67% (the worst in his career.) Is he really unfit? Is he on drugs? Judging by his inability to judge the pace of play I would assume he had a crafty joint in the dressing room (or being very anti-smoking, a hash brownie!!). Whatever it is, he needs to recover form before our title challenge disappears before Xmas. I would rest him tonight and hope he is fit for the weekend game.

Thankfully we can play a midfield of Song, Denilson (Nasri, if fit), JW and Rosicky, who really ought to dominate.

Upfront we have started to stutter. After a superb opening to the season our strikers have forgotten where the goals are, though it has to be said that the service to them has been dreadful. We have two strikers who are formidable in the air and yet they have not received one decent cross in 3 games. Theo is sure to be double teamed at Wolves and he has looked our best attacking option, I fancy him to score when he gets on as sub. The recovery of RvP is very exciting, if only to give Chamakh a rest. In the absence of Nasri I would expect Arshavin to start. 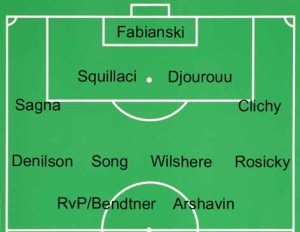 We need these points, the complacency we witnessed on Sunday will garner nothing. It is certain that Wolves will give everything to gain another scalp and we have to show the same sense of purpose.

Come on Boys, show us that it means as much to you as it does to us.

This entry was posted on Wednesday, November 10th, 2010 at 9:26 am and is filed under Uncategorized. You can follow any responses to this entry through the RSS 2.0 feed. You can leave a response, or trackback from your own site.