Is it time Steve Bould took over from Pat Rice?

How often have you asked yourself “Just what is it that Pat Rice does?”

Now, don’t get me wrong, he is a top bloke and Arsenal through and through, but is there an actual point to him as Wenger’s number two? 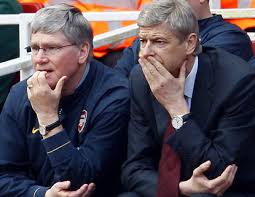 To be honest I think it is more a reflection on Wenger than on Pat Rice. Rice has been at Arsenal a long time and being a loyal servant to Wenger but isn’t it time to freshen up? Many people will tell you that Ferguson is so successful because he brings in different number two’s every couple of years who have their own ideas and impact the squad and how the team play. Does Rice really have an impact on how we play or how we train?

One man who does have an impact and could have a bigger one is Steve Bould. Perhaps it would be foolish to move him from his post as coach of our Youth team but there are various reasons why he would be suited as Wenger’s right hand man:

Things are just a bit stale at Arsenal at the moment. Its hard to put a finger on just what it is, but when we look to change something it doesn’t quite stick. Like when we changed to a 4-3-3 last season and started defending from the front – it lasted about a month. Maybe if someone more vocal was beside Wenger he would stick to it and be told its a good idea.

The sad thing is Wenger doesn’t like being told what to do – maybe if it was someone more vocal than Pat Rice he might have to listen?!!

This entry was posted on Thursday, August 5th, 2010 at 9:36 am and is filed under Uncategorized. You can follow any responses to this entry through the RSS 2.0 feed. You can leave a response, or trackback from your own site.

151 Responses to Is it time Steve Bould took over from Pat Rice?