In looking back at 2011, in my capacity as a particularly grizzled campaigner of many seasons, I’ve decided to pick out some highs and lows that have stuck in my Peroni-soaked mind, Arsenalistically speaking.

We started 2011 very much in the title race and in contention for all four trophies and early on that year my favourite goal of the season was scored. 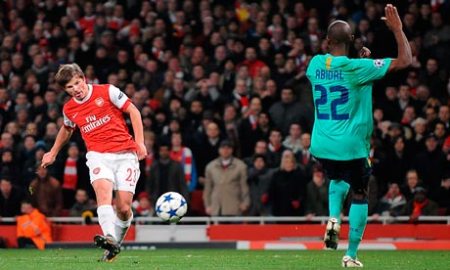 The winning goal against the Catalan Diving Association at Ashburton Grove scored by my favourite player, set up by my least favourite player/bench-warmer, was my highlight of the year. The flowing counter attack that led to this goal was a sensational end to the first leg of the game shown on ITV, although they had to spoil it by damming us with faint praise from Clive I-love-ManU Tyldesley, thusly:

“A Barcelona goal scored against Barcelona.”

The media can be so far up another team’s sphincter at times that all rationality is lost.

Another so called defining moment a lazy media decided to pick up on was the late defeat at Wembley at the hands of Brum FC, then managed by the purple nosed alchy mini-me, McLeish, one of many of the evil Glaswegians acolytes plying their trade in the Premier League. 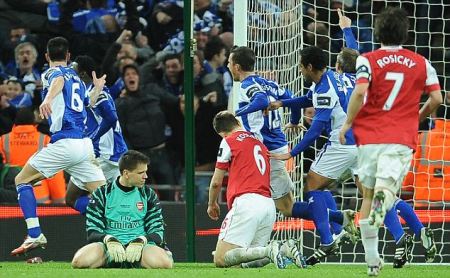 Who can forget (actually who is trying to forget?) Ferguson cuffing Kozzer on the head after his clanger allowed old man Martins to hand Brum FC their first trophy in an age?

Classy stuff from another Ferguson (surely must be related to the dark overlord of Govan?).

A painful moment and one I was reminded of when a group of Brum FC fans began to goad my younger son, who was wearing his Arsenal 2010-11 home shirt, while on holiday in the south west the following month.

Brum FC’s subsequent relegation and the arrest of their owner on money laundering charges proved that football isn’t always a justice free zone.

The agony didn’t stop as the next day Bolton scored a 90th minute winner to finish off our title hopes at the Reebok as apparently in the hotel lobby all the other holidayers(deep in the Bolton territory of Burnham-on-sea) were Trotters as they celebrated our demise with glee.

The path of a Gooner is, as we all know, strewn with strife and scorn from jealous unknowing rival supporters.

A case in point being Tony Pu(gil)lis’s team of hoofers and hyperthyroid Carlton Palmer type players who compounded our misery with a 3-1 trouncing at the S*itannia a fortnight later.

By then our season had petered out (culminating in the last home game featuring a protest march before a defeat to Aston Villa) and only the good start to that season prevented our loss of a top 4 spot.
The manner of our late season collapse was cause enough for gooner melancholy yet the summer transfer window continued the travails.

The late(ish) exit of the homesick Spaniard left a gaping creative hole in the first team which has either not been filled or was filled late depending whether Arteta is seen as a direct replacement or not, an argument for another day however of the new arrivals he is my favourite.

In the way that a new girlfriend may have something about her that reminds you of a previous girlfriend you have good memories of, Arteta was like a reprise of the homesick Spaniard that made moving on from our ex number 4 a bit easier.

The acrimonious departure of the world class bench warmer referred to earlier was less a cause for sadness and more a sign of the times, in my opinion.

The late flurry of arrivals into London Colney was preceded by the slaughter at Old Toilet(a week after a painful home defeat at the hands of the ‘dippers) where a decimated Arsenal team travelled north west and lost 8-2, a coincidence that many of the phone hackers (journalists) proved Wenger was panic buying. An example of lazy, simplistic thinking from writers with an agenda to adhere to, regardless of facts or the application of intelligence.

By then our year had well and truly bottomed out and while the subsequent recovery has given cause for optimism it is tinged with the caveat of recent draws against lower ranked teams. The leadership style and sensational form of our present Captain Robin and our improved resilience will need to serve us well at the business end of the season as the days begin to lengthen and things hot up on and off the pitch. 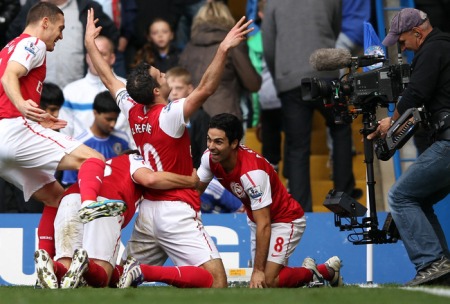 A highlight of the season has to be the elimination of the teams from the so called power house of English football, Manchester, from the elite European competition, and the subsequent schadenfreude. Whilst most supporters of other teams would be ecstatic at this being gooners I sensed we then indulged in a bout of, if I may borrow from the Rose the Sage-Stalker from Two and a Half Men, “Glaukenschtoken” – guilt at enjoying the schadenfreude.

The sight of Fergie of Red Nose flouncing out of a Champions League press conference where a rogue member of the Press pack suggested maybe the Old Toilet crew were struggling in Europe was comedy gold when viewed in the context of their subsequent exit into the teams that populate the Channel 5 trophy.

Due to results for Abu Dhabi FC preceding the last group game their exit was more expected yet the Old Toilet team’s departure was the cherry on the top of a tasty Mancunian cake.

The Robin hatrick at the bus top in Fulham is also something to cheer us up in the bleak midwinter we find ourselves in now, especially the swerve and arc which Robin imparted onto his third goal.
The image of him kneeling in front of the always magnificent away support, arms perpendicular in supplication it seemed, was a memorable and vivid image encapsulating our slow and painful recuperation from the early season traumas.

This entry was posted on Friday, December 30th, 2011 at 9:39 am and is filed under Uncategorized. You can follow any responses to this entry through the RSS 2.0 feed. You can leave a response, or trackback from your own site.