It’s Time To Right The Wrong

Memories of singing, dancing and grinning from ear to ear at halftime on November 21st 2010 have been plaguing me and many other supporters ever since that fateful second half when twitchy switched it around and we contrived to snatch defeat from the jaws of victory. It was the start of a recurring theme this season, and it was started by our greatest rivals- “them from down the road”.

I put it to you, Gooners and Goonerettes, that tonight’s game is the most important of our season. Not because it could take us to within 4 points of the league leaders, not because we have to get the bragging rights back, but because this team needs to prove to themselves, to their manager and to us that they have it in them to redress the wrongs of that game and subsequent seismic jolts of this season. That is where the doubt set in, and doubt is like a thief, it steals the possibilities from your life.

The players doubt, the fans doubt. It’s all over twitter and the blogosphere. To those who doubt I offer you this:

“A person who doubts himself is like a man who would enlist in the ranks of his enemies and bear arms against himself. He makes his failure certain by himself being the first person to be convinced of it.”

In other words- doubt the team and you might as well support the Sp*rs! I know there are many Gooners who prefer to spend their energy supporting the good guys than hating those “cock n ball”s from the less salubrious parts of North London. But today, those emotions go hand in hand. We need to strike a counterblow for our good and their bad. We need to settle the score. In short, tonight is about REVENGE!

Arsène Wenger did not give a press conference yesterday, much to the chagrin of the journalists who make their living by spinning his words. And I know why. Because Arsène knows… that this is about retribution and he could never allow himself to say that in public, to the press. The fact that this morning’s papers are full of exactly that kind of spin on a straightforward Cesc interview perfectly justifies his stance.

Revenge is a mighty motivator, make no mistake about this- we will turn up tonight because every one of these players is playing for belief- in themselves, from their manager and from the fans.

And I can give you other (concrete) reasons for carrying that hope through your day and into tonight’s clash: Our key defensive men are all back and aside from Sagna have had a match to play themselves into a bit of form. Big Johan made us look like a different team with his assuredness at the back and I never panic with Szczesny in goal. I feel for Eboue after a generally decent performance in regulation time on Sunday, but Bac isn’t called “Mr. Reliable” for nothing.

As long as they can keep their heads in the cauldron of hate, I believe they can repel anything thrown at them. Ahead of them, Song is also available and I believe he will play. I know not everyone shares my faith in him, but we are a far more solid and coherent team defensively when he plays.

But my main grounds for optimism are this: we are playing away. Our away form is considerably better than our home form. The inflexible and recently derided 4-2-3-1 system works much better when the other team try and win the game, and there is no chance the Spuds will sit back against us on their own turf. I think it’s also significant that our away support makes almost as much noise as the Emirates does- sometimes even more!

It is also worth stating that, despite having some fantastic players, most of their team are not in great form, in particular Defoe has had a very poor season by his standards.

So, with hope and belief in my heart, my team for tonight would be: 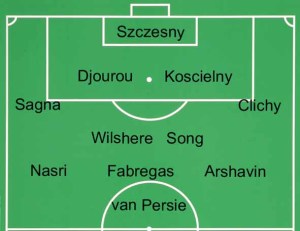 I think Wenger made an error in starting with Walcott on Sunday and bringing on Arshavin as a sub, I hope he will do the reverse at WHL so Theo can terrorize them in the second half. Wilshere will probably come off after 60” for Diaby (who finally looks like he’s plinking* TM RockyLives).

For pride and victory…

Come on you rip roaring gunners!

This entry was posted on Wednesday, April 20th, 2011 at 9:29 am and is filed under Uncategorized. You can follow any responses to this entry through the RSS 2.0 feed. You can leave a response, or trackback from your own site.

190 Responses to It’s Time To Right The Wrong